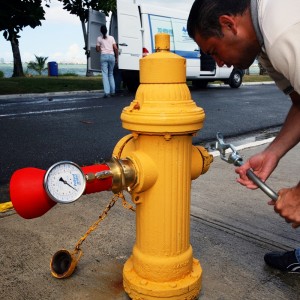 By 2006, Puerto Rico water production by the P.R. Aqueduct and Sewer Authority (PRASA) had increased to 650 mgd, but 59% of this production was unaccounted-for (non-revenue) water. To address this problem we proposed and were contracted to perform a full accountability water audit involving approximately 25,000 water customers in 3 pilot areas, plus approximately 2000 large-meter customers island-wide. The study revealed that about 15% of the customers had metering or billing errors which potentially caused revenue loss and the remainder was real loss. Designed and deployed computer-based customer meter census protocol.